Building My Faith Bridge, a guest post by Kelly Leech 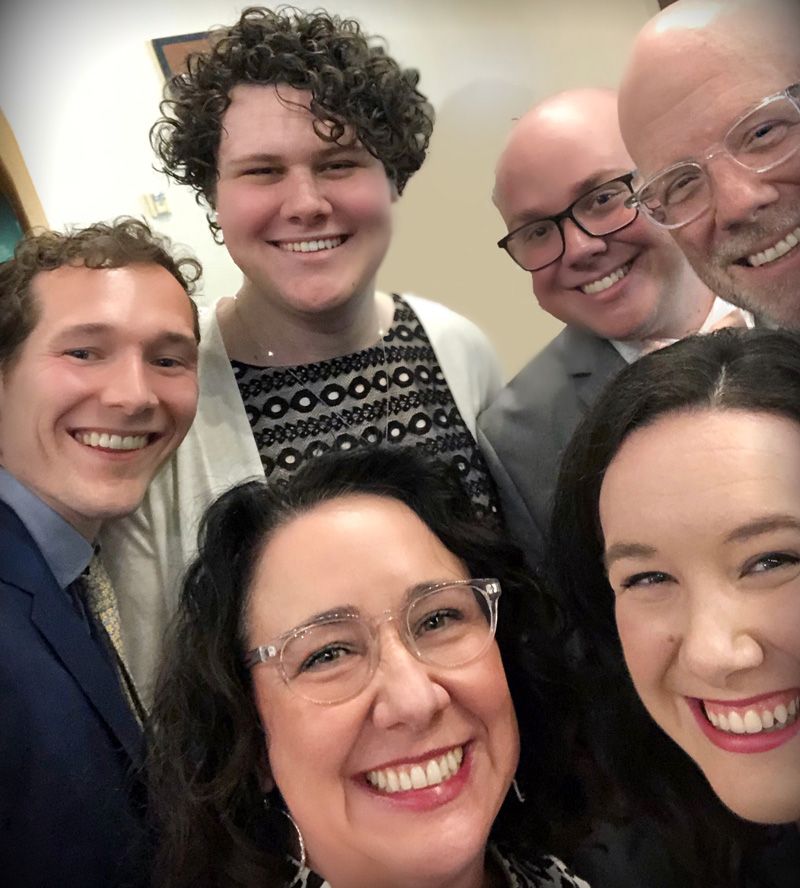 Through the journey of her child’s transition, read how one PFLAG parent has come to a new understanding of how the Catholic Church fits within her own faith journey.

My name is Kelly, and my pronouns are she, her, hers. I am an ally of the LGBTQ community.

I was also raised in the Catholic faith, met my husband at a Jesuit Catholic University, and spent years raising our 3 children to be Catholics.

Growing up, the Catholic church always felt like home to me.

I moved around a lot as a child as my father was in the military. One thing we could always count on for consistency was that we would be attending Mass and catechism (as they called it back in the day), at our local catholic parish- whether that was in Germany or Kansas.

Belonging to the universal church is one of the things I loved about being Catholic. The very meaning of the word catholic – universal – is that it was meant for all people.

I remember heading over to Mass one Saturday night at St. Gabe’s after visiting with friends who lived nearby and trying to explain to my Baptist friend how I could go there to church so freely when I was actually a member of St. Matthew’s way down the road.

One of my most cherished faith memories happened in the first week of living in Dubai. The move to Dubai had caused a lot of personal heartache for me because we were so entrenched in the Catholic community in Charlotte- it was where my children attended school, enjoyed scouting, where we worshiped and where I spent all my time volunteering.

We were not only moving completely across the world, but we were moving to a Muslim country in which I had no idea how my faith life for my family was going to play out, and how I was going to find my community.

The holy day for Muslims is Friday, which made the weekend for the UAE, at least our first year in Dubai, occur on Thursday and Friday. The local Catholic church adapted and we went to Mass on Friday mornings.

My husband travels a lot, so that first Friday I found myself alone with my children trying to navigate how to get to the church (before GPS). The church was literally way out in the desert. What we came to discover after walking in the church is that the expat family Mass I was expecting was actually a Mass being held for migrant workers from the nearby work camp. The church was completely filled with just men from India.

My children’s eyes were as big as saucers.  They wanted to go home, but I thought to myself, “Well, we are going to stay and attend this Mass.”

Not only was it a form of hell in 115 degree heat just to find this church, but I knew, belonging to the ‘little c’ Catholic church, that no matter what language the service was held in, the order of the Mass would be the same, and we would be able to follow along. And so we stayed. We didn’t understand a word, but we could follow along.

And this was the moment of grace I will never forget.

As we were walking out of the church with these 200+ brown men from Kerala, so foreign to us in almost every way– these men living cramped together in multi person dorm style rooms, making very little money from a western standpoint, away from their families for years at a time– I felt a tap on my shoulder.

I turned around and 3 men stood there. The chosen spokesperson had tears in his eyes. And he said “We just want to thank you so much for coming to our Mass. You have no idea how much this means to us”

Intellectually, I didn’t really understand completely why our presence was so meaningful to them, but boom: instantly I thought about Jesus, about inclusion, about love, welcome, and respect and so many other things.

And I patted myself on the back that I had provided my children such a teachable moment about being Catholic and what that really meant.

Fast forward 8 years. My family has moved back from Dubai. We’ve re-engaged with our faith community at Saint Matthew. One by one my children get confirmed, finish HS, graduate and start college.

My youngest child and I have already faced together her pronouncement that she was an atheist and didn’t want to get confirmed.

I insisted that she complete all the Confirmation training and then make up her mind. I’m eternally grateful to the priest that counseled her the night before Confirmation that it was ok, that she was doing the right thing not getting Confirmed, and that most of all God wanted her to lead a moral life and remain open to faith experiences.

Because I was teaching her Confirmation class, I had to go to the Confirmation service with my students and leave my youngest child at home.  This was all very hard to navigate, and I decide I need to take a little break from being so involved at church.

Fast forward another 6 years to the present.

I have just experienced the hardest 2 years of my life. My child comes to me in her senior year after an already difficult time in HS and tells me she is transgender. She has faced so many battles, including such a deep depression she has to take a medical leave of absence from college. After several months of failed medication trial after failed medication trial she finally requires electroconvulsive therapy to recover.

When it comes to my faith life, I’m dead inside. And I’m stuck.

I can’t enter the doors of a church that tells me my child is intrinsically disordered.

I can’t enter the doors of a church that tells me that my child is choosing this as a lifestyle, as an ‘ideology of gender’. Trust me when I say this is not a choice.

I can’t enter the doors of a church that tells me my child cannot be transgender because God doesn’t make mistakes.

That my child cannot take the lifesaving medical steps to align her body with what her inner mind is telling her she is.

That although God doesn’t make mistakes, the church doesn’t think twice about supporting another family, another child. Perhaps one who needs lifesaving surgery and medication to repair a congenital heart defect. I don’t see the difference.

I read about Catholic schools firing members of the LGBTQ community, targeting them for not conforming to church teaching. However, they cast no judgement against straight couples living together before marriage, or married couples using contraception or in vitro fertilization.  “Why not judge Catholics for not welcoming immigrants, feeding the hungry or visiting the sick? In the Gospel of Matthew, failing to do that earns you a ticket to damnation.”*

But I really am stuck. Not only can’t I enter the doors of my universal church, but I am also so culturally Catholic that no other faith community seems right.

I recently read a book by a Jesuit priest named James Martin called, “Building a Bridge: How the Catholic Church and the LGBTQ Community Can Enter into a Relationship of Respect, Compassion, and Sensitivity.”

What it made me realize was that if I wanted the church to meet me where I am at today, to see what my new insights and beliefs are now that I had traveled this difficult path with my daughter, that I also needed to be prepared to meet the church where it is now.

If I am unwilling to go to church to have uncomfortable conversations with my fellow Catholics and to be a presence in support of the LGBTQ community, what would ever change? If not me, then who would ever do that?

That is the journey I am on now: to figure out where I can start building my faith bridge.

I am clear in my understanding that my beliefs conflict in a major and seemingly insurmountable way with church teaching. I’m unsure if I will ever be able to reconcile that.

So, maybe, I will be able to return to Mass at St Peter’s, run by my favorites, the Jesuits, which, by the way, is labeled as LGBTQ affirming on gaychurch.org.

Maybe it will turn out I won’t be able to.

But I need to start first attempting to build those bridges within my own faith community before I turn my back on that Mass which now seems so foreign, so different.

Because maybe in attending Mass in what now feels like a foreign language and standing up to defend my daughter and the LGBTQ community at large as that odd person out in a room of people seemingly all the same–just maybe I can again, like that moment of grace all those years ago in Dubai–bring a moment of Jesus, inclusion, love, welcome, and respect to someone who feels like an outcast or a stranger. And, maybe they will bring that moment to me as well.

Because after all–in my faith tradition–no matter what language it is spoken in, the Order of Mass is the same everywhere in this world.

I may not be able to understand a word, but I hope once again I will be able to follow along.

*quote from “Can the Catholic Church ‘Evolve’ on L.G.B.T. Rights?” By John Gehring

Kelly Leech shared these remarks at a recent PFLAG Charlotte Event: “At the Intersection of Faith and LGBTQ Identities ~ Beyond the Welcome Table”.

Kelly identifies as a cradle Catholic and has raised three children in the Catholic tradition, including teaching faith formation for 20 years.

Kelly has a background in nursing, and spent 7 years on active duty in the Army Nurse Corps.  Following her family’s return from an overseas move to Dubai, she decided to focus her energies raising her children and volunteering within school and church communities.

Kelly’s youngest child, now 20 years old, identifies as transgender. Through the journey of her child’s transition, Kelly has come to a new understanding of how the Catholic Church fits within her own faith journey.”

7 thoughts on “Building My Faith Bridge, a guest post by Kelly Leech”